On 28 July 1976 Tangshan prefecture[1] in North China was hit by an M 7.8 earthquake,[2] which also severely affected nearby Tianjin City. The earthquake began on 28 July at 03:42:53 AM while most of the people in the region were asleep.[3] People who were awake saw thousands of electric flashes in the eastern sky, like a red sun rising, and then heard a loud roar like thunder that lasted for some 30 seconds,[4] then the earthquake hit. A relatively shallow epicenter (only 11 km underground) made the earthquake a category XI event – the second strongest on the Chinese scale. Tangshan suffered category XI (extreme) damages and different regions of Tianjin suffered category VI-IX damages. Several aftershocks also rocked the region. At 6:45 PM, an M 7.1 aftershock practically levelled Ninghe County in greater Tianjin. Hundreds of smaller aftershock also occurred.[5] This made emergency rescue efforts hazardous and added to casualties and damage.

Among disasters, earthquakes are known as mass harmers, since they usually strike without warning and can cause serious damage to large populations and infrastructure in a very short time. However, they tend to occur in roughly the same regions over time and therefore communities can prepare against them. The Beijing-Tianjin region has a history of recurrent earthquakes. Tianjin alone had altogether 1,902 recorded tremors between 1345 and 1990, 359 of which were of a smaller magnitude (M 3-5) and 18 were mid-strength (M 5-7).[6] In 1966 a strong earthquake shook Hebei Province’s Xingtai County leaving about 8,000 persons dead. This triggered the first earthquake preparations in Hebei, of which Tangshan is part. However, in the anarchy of the Cultural Revolution (1966-76), it took five years to establish the National Earthquake Administration under the State Council for predicting and monitoring earthquakes as well as for improving earthquake preparedness and emergency responses.[7] The M 7.3 earthquake that struck Liaoning in February 1975 made the Central Government to issue instructions entitled ‘Jing-Jin Region Criteria for Inspecting Industrial and Public Buildings’, referring to the Chinese capital and Tianjin. Under these criteria, city bureaus and danwei carried out surveys of their public, industrial and residential buildings with a view to their capability to withstand damage from an earthquake. 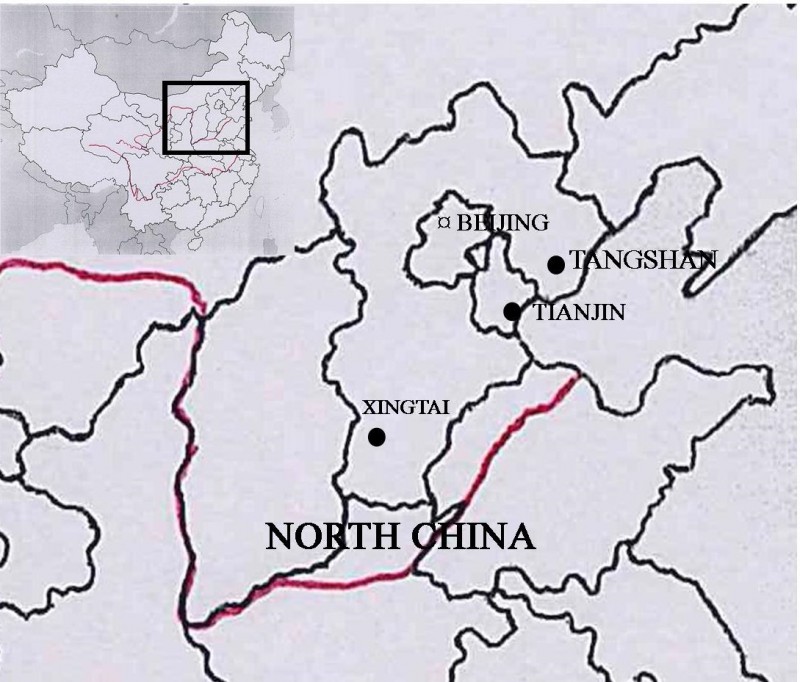 In 1975 the State Construction Committee Document no. 406 further ordered reinforcement of units that were important for production and ‘political economy’ in the major cities in the region. These included such buildings as the Party Committee and urban government buildings, but only very few residential houses were reinforced this way before the 1976 earthquake.[8] Both in urban and rural areas in the region houses had been constructed without following any seismic design standards, as national standards did not exist before 1976.[9] The Tangshan region itself was not regarded as prone to strong earthquakes, but the city lies on unstable alluvial soil making it a highly risky location in case of a major earthquake. In Tangshan and its surroundings urban houses could not withstand the tremors and therefore became unsafe during the earthquake making both urbanites and peasants vulnerable to this type of disaster.[10] In Tangshan earthquake, unlike in most disasters during the Mao-era, vulnerability to injury and death due to a disaster were therefore not distributed following socio-political divisions in society, but were more uniformly shared by different social groups due to geological circumstances and universally poor building standards. 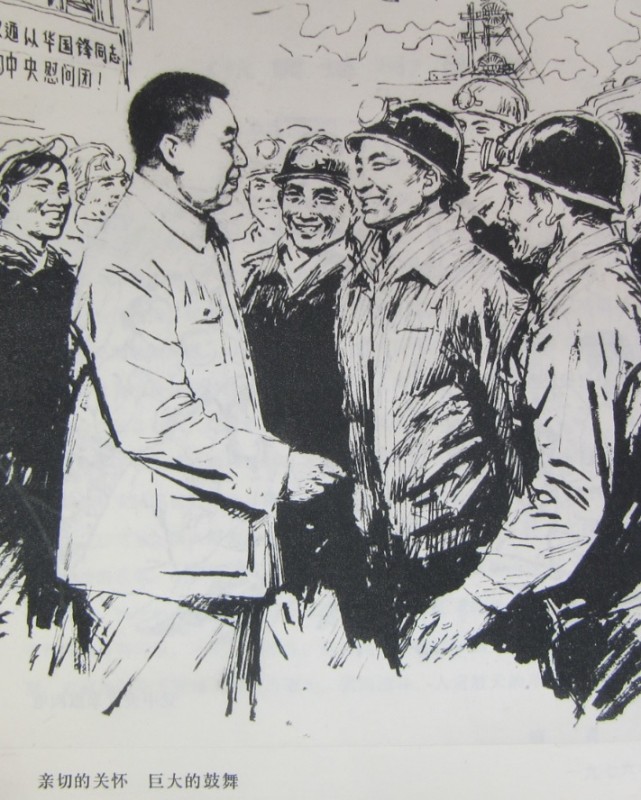 A separate, but integrated part of earthquake preparedness system was the short-term prediction and reporting network, which was probably one of the most indigenous features of the Maoist approach to disaster management.[11] It combined scientific geological survey stations that were assigned the duty of earthquake forecasting and warnings with the so-called people’s survey and reporting network with the common people keeping their eye open for macro and micro anomalies in natural environment and using simply-constructed earthquake survey facilities to issue earthquake predictions and warnings.[12] Although afterwards some early signs were reportedly spotted in various localities, the Tangshan earthquake was not predicted with any accuracy through this system. The region’s preparedness was therefore low.

The Tangshan earthquake is regarded as the deadliest earthquake in the 20th century and one of the most deadliest in recorded history. The initial death count reported by the Chinese government put the casualties at 655,000, but this number was later reduced to around 240,000 to 255,000. This has been explained so that the latter figure includes only urban residents in Tangshan, which was practically levelled to the ground. Also Tianjin City alone suffered about 24 000 casualties.[13] At least 700,000 more people were injured in various degrees. Economic losses were estimated to be about 10 billion yuan, but Tianjin city alone suffered about 7.5 billion Y in direct and indirect damages, therefore even this figure is probably inaccurate. Due to the size of the city, the value of damage was actually greater in Tianjin than in Tangshan.

The earthquake produced an initial chaos and loss of control. Much of the initial rescue effort was carried out by the survivors themselves who used their hands and makeshift tools to dig out other victims, property and food from the ruins. In Tangshan medical facilities were largely destroyed and they also suffered wide damages in Tianjin. Medical personnel organized makeshift clinics with rudimentary equipment. For some time there was also dire shortage of clean drinking water and food in the disaster zone. People also had to construct temporary shelters for themselves from the rubble and debris. The dead were buried in shallow provisional graves that later had to be opened and corpses reburied due to hygiene reasons. 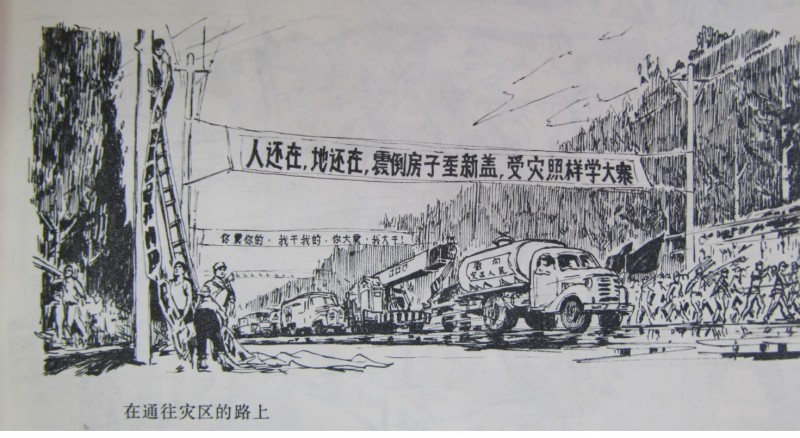 Photographed by the author

Central government reacted fast to the situation in Tangshan and began to dispatch rescue teams, equipment and relief aid to the region quickly. The People’s Liberation Army had military exercises going on in the region and shifted quickly to rescue and relief work. Aid was flown in by the army, and when roads and railroads were reopened, shipped in from other parts of China in large quantities. In Maoist fashion of self-reliance (zili-gengsheng) China refused outside assistance. In Tianjin City, the local government was able to regain control quickly after the quake and organized the Headquarters for Resisting the Earthquake and Relief Work that directed the rescue and relief effort, although also Tianjin needed outside help in form of food, rescue and medical workers and later building materials for reconstruction.

In a Maoist fashion, which stressed the masses’ own role in reconstruction, people were told to rebuild their own houses and factories and rely as little as possible on central assistance. In reality both Tangshan and Tianjin received large central government subsidies for reconstruction. Tangshan was slated for complete rebuilding. Maoist style of rebuilding also prioritized production facilities, and therefore factories, mines and infrastructure were reconstructed first and residents’ housing only later. As late as 1981 in Tianjin, and 1982 in Tangshan, large parts of urban residents were still living in temporary housings, while industries in both cities had notably recovered. Only then did the Central government begin to spend notable sums in the housing problem. Reconstruction can be said to have finished in Tianjin as late as 1991, and new buildings are said to have followed new earthquake resistance standards that were issued after the Tangshan earthquake as a direct response to it. For its reconstruction, Tangshan has earned a nick name of the “Brave City of China”. 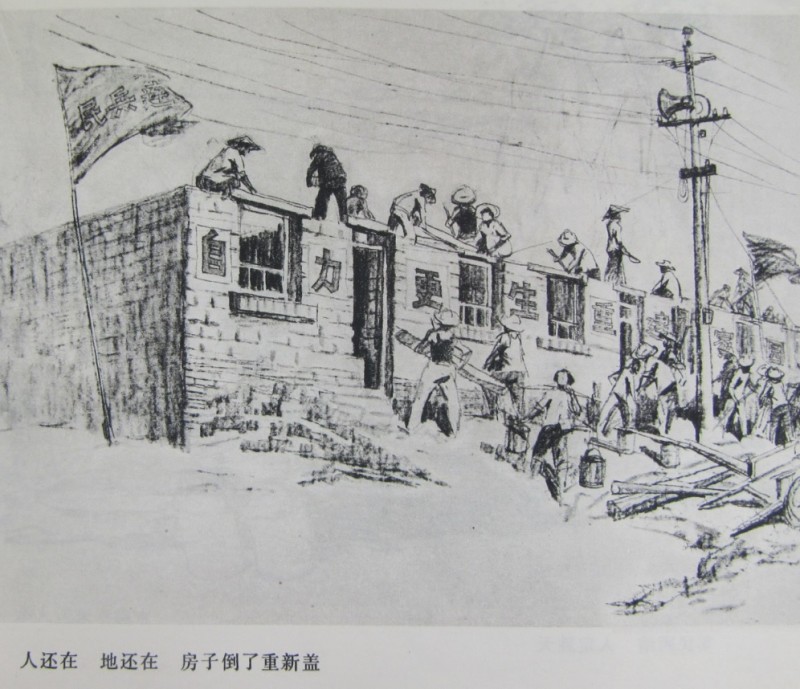 Cartoon of homes being rebuilt, 1976

The earthquake happened when China was undergoing political transition to post-Mao era. Chairman Mao died on the 9th of September when the early reconstruction has just started. During the rescue and early reconstruction period people were made to attend political night schools where they studied the consolation telegram sent by the Party Center in the name of Chairman Mao and Mao’s thoughts. People reportedly wept hot tears for this show of concern by the Chairman. People were also told to criticize Deng Xiaoping, who had been removed from the party leadership in the earlier spring. Propaganda claimed that the rescue and reconstruction campaign was a campaign between the rightist Deng Xiaoping line that relied on outside help and correct Maoist line that relied on the strength of the masses in the relief and reconstruction work. Propaganda also tried to persuade local units not to ask for government assistance, while at the same time praising the Communist Party for providing generous relief aid to the victims. The new Prime Minister Hua Guofeng toured the disasters sites using this as an opportunity to consolidate his position against his political enemies in the Party leadership.

The Tangshan earthquake prompted the central government to draft the first national earthquake resistant building standards, which have since been further developed.

Lauri Paltemaa is professor of East Asian politics and director of the Center for East Asian Studies at the University of Turku, Finland.

[2] Contemporary reporting called it the ‘Tangshan-Fengnan earthquake’ based on the location of the epicenter and damage to these two regions.

[11] The system was made famous by its apparent ability to predict a major earthquake in Liaoning in 1975. Its features are outlined by Gordon A. Bennett: Mass Campaigns and Earthquakes: Hai-Ch’eng, 1975. China Quarterly No. 77 (1979), 94-112. The problem with the system was that most of its predictions were false and thus useless.