In 1921, a huge famine hit the province of Hunan, one of the most significant agricultural regions of southern China, resulting in serious consequences. At least 54 districts across all parts of Hunan were affected and more than five million locals suffered.[1]Although drought was the most direct cause of the disaster, various other factors, including vector-borne epidemics and military power-struggles among warlords, should also bear inescapable responsibilities. In response to this devastating famine, relief efforts were made by both governmental and non-governmental forces, but these limited relief funds were insufficient to meet the vast needs of victims. As a result, many victims remained unrelieved and hundreds of thousands of people ultimately died of starvation.[2]Given its huge destruction, it was possibly the worst catastrophe to strike modern Hunan since the havoc caused by Taiping Rebellion in the mid-19th century.

Multiple factors jointly contributed to this severe famine, but extreme meteorological conditions in 1921 were perhaps its most direct and obvious trigger. According to a report published in The North China Herald (a Shanghai-based English news weekly) at the time, from early May to late June, almost all parts of Hunan province had undergone a 2-month period without rain, and some districts among them even suffered for another two months.[3]In some of the worst-hit districts, reports showed that the crop of 1921 was only 20% of the normal yield, which was by no means sufficient for local subsistence needs.[4]Furthermore, before taking the blow of this drought, some districts in the Xiangdong area (eastern Hunan) had already been struck by some small-scale floods in the spring time, wherein “houses were washed away and cattle drowned”.[5]To make matters worse, plagues of insects at that time added to the suffering of Hunanese. In a small district called Anren (east-central Hunan), local correspondents reported that residents there were simultaneously threatened by severe smallpox, fever and dysentery, exacerbating an already dire situation.[6]The famine of 1921 was to a large extent evidently the consequence of a series of natural disasters.

However, natural factors alone cannot fully explain the huge devastation. The appearance of mass starvation in 1921 Hunan famine was also a man-made calamity to a certain degree. Prior to this huge disaster, most parts of Hunan province had already been plagued by a large-scale warlord fighting from 1917 lasting for one year. Although a fragile truce was brokered in 1918, massive numbers of troops were still stationed all across the province preparing for future struggles. In order to accommodate these troops, many local resources were depleted,[7]and even some granaries created for famine-prevention were raided to meet the huge demand of local armies.[8]Lack of reserves of emergency supplies made these districts rather vulnerable to any minor climate change, let alone this huge drought. Meanwhile, robberies by bandits in the chaos after the natural disaster also exacerbated the situation. In the Chenxi district (western Hunan), for example, a report showed that at least 151 villages there were burned, hundreds of women were taken captive and all the residents were forced to flee by local brigands.[9]Although this tragedy represents only an extreme case, robberies which made “no shop dare to open and no peasants dare to farm” all over the province[10]did disrupt local agricultural production and commodities trading seriously. This to a large extent slowed down recovery from the catastrophe. Instead of preventing robberies, poorly-disciplined soldiers merely brought more suffering to the people. They either plundered the villages they passed, or publically asked for contributions. In the Changde district (northern Hunan), the amount of money extorted by soldiers was as much as 400,000 yuan, and the situation in other districts proved to be not much better.[11]Induced by natural causes and aggravated by numerous human factors, the 1921 Hunan famine had a rather complex causation.

When this famine struck, the Hunan government responded immediately. As early as mid-April when the drought was only showing its early signs, a ban on the export of grain was issued by the provincial governor in order to preserve grain for the coming famine.[12]In the meantime, although there is evidence to suggest that finances of the provincial government at that time were not very satisfactory,[13]monetary relief and relief grain were still distributed in April and May so as to relieve some earlier-hit districts.[14]However, as the famine became increasingly serious and expanded wider, the already battered government finances could no longer meet such a huge relief demand. Therefore, from June onwards, the leading role of famine relief shifted gradually from government to non-governmental forces, among which the International (Hunan) Famine Relief Bureau was the most important.
Established on June 2, 1921, by leading philanthropist and former Chinese premier Xiong Xiling, the International Famine Relief Bureau played a pivotal role both in fundraising and fund distribution. Following the bureau’s well-organised campaign, many Hunanese both at home and abroad were persuaded to voluntarily donate, and the amount of money finally collected was rather substantial, though still insufficient. According to a report produced by the bureau itself, the total money raised was 1,414,875 yuan,[15]of which 54,000 yuan was given by the Changsha General Chamber of Commerce while the Hunan Government also contributed a significant amount of money.[16] 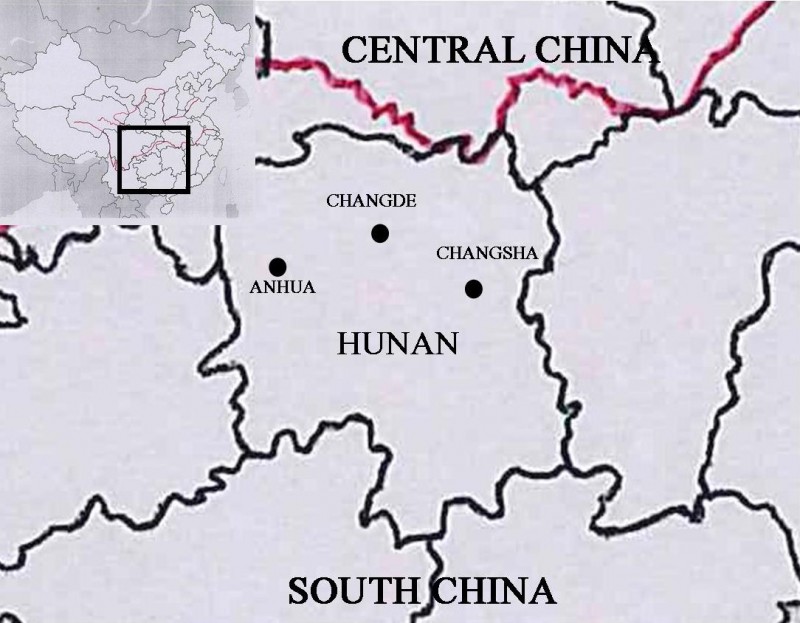 In Japan, many overseas Hunanese responded to the appeal for donations by spontaneously organising several “charity performances” in order to raise funds for their home-province.[17]More notably, although foreign donors initially did not believe that Hunan was plagued by famine given that it had long been recognised as a breadbasket,[18]as more and more reports on the disaster circulated, they were finally convinced to take part in the fundraising: contributions from American donors alone were as much as 568,495 yuan, comprising approximately one third of the total amount.[19]

After collecting these funds from various sources, the bureau launched relief distribution rapidly. However, when the money came to the local government level, much of it was either embezzled by officials or seized by some powerful households.[20]Some magistrates even simply used the famine as a cover to defraud donators of their money.[21]Given that the demand of millions of victims far outstripped the limited relief,[22]compounded with the fairly insufficient and unjust fund distribution process, these relief works actually failed to have a great effect.

Just like most of its previous counterparts, the 1921 Hunan famine resulted in severe social degradation. In the Anhua district, journalists reported that women there were sold by weight (jin),[23]and similar reports showed that this female tragedy was not an exception.[24]As the famine worsened, more shocking events, including cannibalism, took place, indicating that in some disaster-hit areas, morality had been completely abandoned.[25] In some cases, the desperate started to commit crimes in order to get food: in urban areas such as Changsha, reports showed that many rich households were robbed by starving citizens[26] while in some rural areas food shortages led to massive peasant riots.[27]

The famine, though, also resulted in long-term positive consequences. Different from previous civil relief forces, which were either temporary or loosely organised, Xiong Xiling’s International (Hunan) Famine Relief Bureau was the first permanent and systematic civil organisation in Hunan, which could make continuous efforts to confront various disasters.[28] The emergence of the Bureau, along with some later-established small civil relief organisations, filled the vacancy of a strong government’s absence in Hunan in the 1920s,[29]which not only largely improved Hunan’s disaster-relief system, but also contributed greatly to relief works in Republican Hunan during a politically turbulent era.[30]On these organisations’ way to the historical stage, the 1921 Hunan famine undoubtedly played an important role.

More than simply bringing non-governmental relief organisations into the arena, though, the 1921 Hunan famine was also an event that accelerated the modernization of specific relief measures, among which the large-scale application of “work relief” was perhaps the most conspicuous. Although sporadic food-for-work attempts had been made in previous Hunan disaster-relief history, it is the first time when work relief was given equal weight to direct food or cash relief.[31]According to Hunan Relief Bureau’s own report, around 47.5% of the total relief expenditure was used for work relief, which was almost the same as money used for “direct” relief.[32]Achievement of applying this large-scale work relief strategy was also rather notable: Before 1921, Hunan had only one short highway linking Changsha and the south. No highway at that time ran east-west, which to a large extent hindered the economic development of western Hunan. Given the turbulent political situation, building any highway was hard to realise. However, after the 1921 famine, the construction of a highway heading west was again put on the agenda as a part of International Hunan Relief Bureau work relief project.[33] Finished in 1928, the well-built Tanbao highway can be regarded as a legacy of the 1921 famine to some degree, and later history proved that it did benefit Hunan’s economic development largely.[34]With its potential to relieve famine victims while bettering infrastructure, work relief was more and more adopted by Hunanese when confronting later disasters. Paradoxically, the 1921 famine influenced Hunan’s disaster-response system positively and profoundly.

Apart from bringing those above-mentioned “visible” changes into Hunan, the 1921 famine also contributed to the formation of nationalism among Chinese. A large quantity of reports on the 1921 Hunan famine published in newspapers such as Shenbao and Ta Kung Pao successfully attracted the attention and aroused the compassion of many Chinese who lived afar in coastal areas and even overseas. They either generously donated money to disaster areas, or took some other action to support the victims.[35]Some overseas Chinese living in Japan even voluntarily arranged several charity performances to raise fund for those suffered in the famine.[36]In some sense, through massive disaster coverage, the 1921 Hunan famine finally became a resource whereby relations among Chinese lived in different parts of the country got closer, which greatly boosted the process that scholars have termed “the transition from culturalism to nationalism” in the ideological field of Chinese.[37]In other words, the 1921 Hunan famine to a large degree contributed to the formation of the Chinese nation.

Chinese nationalism was not the only “ideological fruit” of this famine. Internationalist ideas also raised amongst Chinese, especially Hunanese, on account of this incident. Many donations to the famine-plagued regions were sourced from donors outside the province, amongst which around one-third of the total fund was from foreign contributors.[38]Such significant assistance from both other provinces and especially overseas let Hunan elites deeply feel the goodness of other people, thus a sense of “concern for all humanity” was raised. Two years later, when a serious seismic hazard hit Kanto region, Japan, considerable effort was made by Hunan elites to relieve people distressed in that disaster.[39]In a meeting held by Hunan elites mainly focusing on the issue of Kanto earthquake, most of them accepted the idea that although the painful memory of Chinese defeat in the first Sino-Japanese war (1894-95) was still fresh, historical grievance must be downplayed in face of natural catastrophe. Disaster-relief work was recognized as a common cause of all the “people on the earth” (shijie renlei).[40]To some extent we can argue that the seed of internationalism was sowed among Hunanese as a consequence of the 1921 famine.

Miqi Pan was an undergraduate exchange student at the University of Manchester in 2016-17.

[1]Andong Zhang, “Study on Famine Relief and Its Effects in Hunan in Early Stage of Republic of China.” Agricultural History of China 1 (February, 2007), 59, 63.

[2] Although the exact provincial death toll is unknown, some district-level mortalities are already huge enough for us to understand the tragic consequence caused by this famine: In Chenxi district, the exact death toll was as high as 12718; even in Huangxian, a relatively less-damaged district, there were also an estimated 3000 people died of starvation. Given that there were more than 54 famine-hit districts in Hunan at that time, the total death toll would certainly be no less than a few hundred thousand. See Hunan Sheng Huaihua Diqudifangzhi Bianzuan Weiyuanhui, Huaihua Diquzhi (Beijing: Sanlian Shudian, 1999), 82.