In June 1892, news of drought-famine in Shanxi, a mountainous and landlocked province in North China, began to appear in the Shanghai press. It is difficult to tell the exact start of the disaster but full-fledged famine conditions were generally thought to have begun in early or mid-1892.[1] The distress affected over 57 districts in Shanxi.[2] The area covered two to three thousand li in circumference, and the most stricken regions were Shanxi’s seven subprefectures beyond the Great Wall.[3] Later, in April 1893, a Chinese newspaper estimated that around 520,000 people in Guihua and Suiyuan circuits, in today’s Inner Mongolia, were living off of government relief.[4] The estimated total mortality of the disaster was one million people.[5]

There are many factors building up to the distress. The primary immediate catalyst was extreme meteorological conditions. The region’s weather in the 1890s was especially abnormal. In Shanxi, the temperature in winter was unusually low, reaching  minus 14 degrees Fahrenheit in some regions.[6] Where there had been no rain for two years, when rain did arrive, it was extremely heavy and premature, especially in southern Shanxi.[7] It is reported that there were ‘many days of unceasing rain, which fell simply in torrents.’[8] There was also early frosting and hail.[9] Extreme weather rendered land infertile, and crop failure brought on famine conditions.[10] 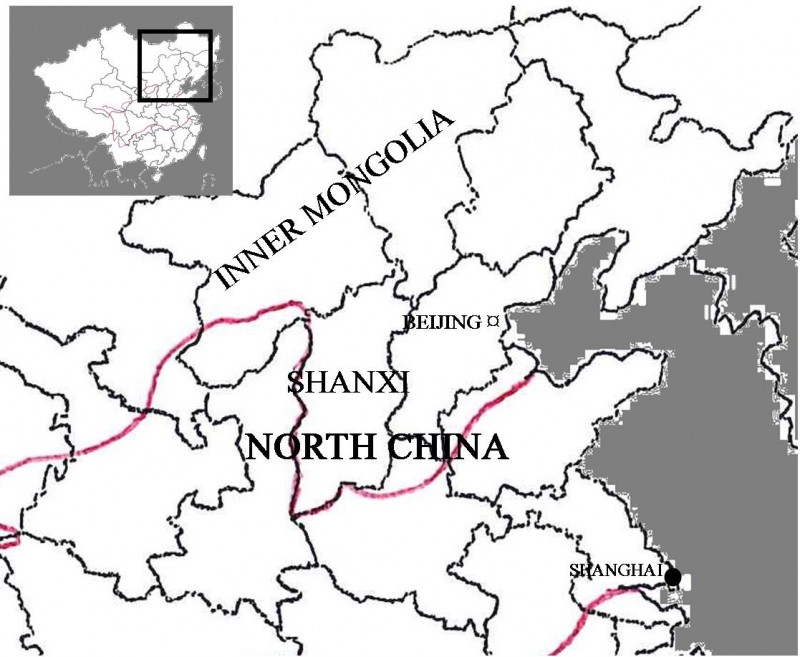 Primitive technology was another cause of crop failure. The agricultural production of Shanxi was highly contingent upon the weather. Irrigation systems in some parts of Shanxi were primitive or even nonexistent, rendering Shanxi vulnerable to natural calamities.[11] Furthermore, poor transportation made relief work difficult.[12] Information about the disaster could not be promptly conveyed to Beijing, slowing the response time during which relief personnel and resources could be transported there from the capital.

The calamity was exacerbated by the attitude and response of the provincial government and private philanthropists. According to reports in the North China Herald, a British weekly based in Shanghai, the response of the provincial government to the disaster was lethargic. Although there were sure signs of potential famine, and although a monumental famine had occurred in the province just 13 years before, provincial officials did not seem sufficiently concerned, responding at first only with loans of grain to the extremely poor.[13]

Shanxi’s distance from major concentrations of philanthropists in the country’s more commercialised regions also undermined the efficiency of relief. Chinese merchants were the financial pillar of charitable work, and businessmen from coastal regions such as Guangdong, Jiangsu and greater Shanghai were often willing to donate to relief efforts. However, because of recent disasters in other sections of north China such as neighbouring Zhili and Shandong to which philanthropists had already donated more than half a million taels (silver ounces), many were reluctant to donate still more.[14]

The state eventually responded by providing monetary relief, administrating relief while encouraging philanthropists to join in. For emergency relief in northern Shanxi, 160,000 taels were withdrawn from the Treasury. Local government in southern Shanxi also lent grain to the stricken and postponed the collection of land taxes.[15] The Shanxi Famine Bureau, led by the major Qing official Li Hongzhang, was set up in the north China port city of Tianjin to coordinate the distribution of funds and resources and the administrative arrangement of relief work.[16] The main famine fund closed in 1894 having collected 1,004,362.80 taels and 673,302.9 piculs of grain for distribution.[17] Total funds allocated to the relief in Shanxi would stand at more than 1,390,000 taels from the central government, local government and private charities.[18]

As in previous disasters, the drought-famine of 1892-95 led to social dislocation and crime. Women and children in starving households were sold off, either into wealthier households or to human traffickers.[19] Children who lost parents in the famine were brought by charitable organisations to cities for adoption, schooling or vocational training.[20] The Shanxi famine of 1876-79 had resulted in cases of banditry[21] and the province had since become a hub of illegal trade activity.[22] The central government feared bandits could stir up disturbances among the large number of famine refugees.[23] Indeed, with the arrival of Shanxi refugees in Beijing for food distribution over the course of the crisis, the number of robberies in the capital increased.[24]

Tang Siu Hang was a visiting undergraduate student at the University of Manchester in 2014-15.