The Shandong typhoon of 1935 was a natural disaster hitting the coast of China and causing severe and devastating river flooding to Shandong province, which lies at the mouth of the Yellow River drainage basin. On August 15, 1935, the first mentions of the devastating effects of the typhoon focused on flooding following tremendous rainfall.[1] News coverage of the flooding and appeals for charity carried on until mid-September, suggesting the sheer scale and duration of the disaster.[2] Reports suggested that the typhoon affected a vast majority of Shandong, inundating a reported 80,000 square miles of the province in flood waters.[3] Human deaths were estimated at 50,000 while newspaper estimates of homelessness varied. One report suggested that over 2,000,000 homes were destroyed.[4] Another estimated that 3,000,000 people were made homeless.[5] In terms of direct economic loss suffered, one estimate put damages at 250 million yuan in damages to buildings, crops and livestock across the province.[6] Other infrastructural losses included flooding of the Tianjin-Pukou railway line, which involved inundation of various rail stations along the route connecting north China with the Yangzi river valley in central China.[7]

The meteorological cause behind the disaster was a typhoon hitting the coast of Shandong, bringing torrential rainfall which adversely affected the Yellow River, which was notorious for flooding particularly along Shandong’s stretch of the river, with one newspaper claiming of all rivers that are vulnerable to flooding ‘the yellow river is the worst’.[8] Man-made errors also added to the flood risk posed by the Yellow River. A report of a previous incident of Yellow River flooding condemned the condition of the dykes built to protect those who lived on the river basin, claiming multiple dykes were breached and unsafe.[9] Also, flood protection in one area had the potential to worsen the situation in another, and this was a feature of the disaster. A dam built to prevent flooding in northern Jiangsu resulted in a halt of the southward flow of the Yellow River, worsening flooding in areas of south Shandong and causing conflict between the provinces.[10] 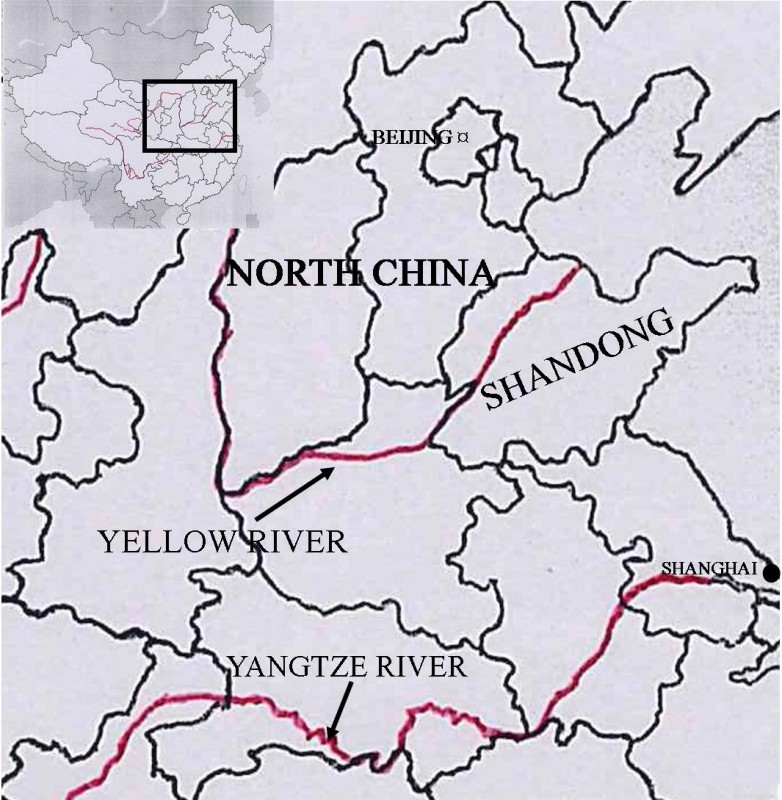 During the disaster, political dominance in China was contested, with fighting between the Nationalist and Communist forces, both vying for control of China through battles such as the Battle of Luding Bridge on May 29, 1935. As a result of the fighting there was a limited amount of central relief effort with the main bulk of relief coming from local leaders such as General Han Fu-Chu.[11] A majority of relief came from charitable sources, mainly from the general Chinese population, charitable organisations and foreign missionaries.

The response to the disaster came from varied donors. Newspaper reported large scale coordinated efforts to move refugees to safety in elevated camps away from the flooded areas. This was usually by train, a new experience for many as most refugees were from rural areas and had reportedly not witnessed such infrastructure before.[12] The camps were reported as being well organised with a rationing system in place and a gender specific work programme and schooling for children to keep people’s mind off their losses.[13]

Some local leaders also provided relief for victims of the disaster in their area. Various newspapers noted the actions of Shandong’s General Han Fu-Chu who moved his own family out of their home to allow refugees to find shelter there.[14] Mr Kung Teh-Cheng, a descendant of Confucius, also allowed part of the Temple of Confucius to be made into a temporary shelter for victims of the disaster. Charitable efforts were also a large part of the response to the disaster with one newspaper making an emotional appeal to Chinese nationals to take pity on their fellow countrymen suffering as a result of the flooding and donate aid to them.[15] There were also reports of various other organisations sending vast amounts of money to be used to aid the suffering in Shandong. For example, 410,000 yuan was received by the Shantung Flood Relief Commission by various sources to help.[16] There is also mention in foreign missionary reports of their contribution to the aid.[17]

General Han Fu-Chu made a visit to the inundated areas to review local flood prevention. Any officials seen as negligent in flood prevention was held accountable and dismissed from their post.[18] Dykes were repaired, and in some areas notorious for flooding bigger dykes were built.[19]

Chloe Wright is a History undergraduate in the class of 2017 at the University of Manchester.