The Jiangsu-Anhui flood of 1911 was a calamitous event that inundated a series of provinces in central and eastern China. This came as a result of the overflowing of a number of significant waterways, most notably the Yangzi and the Huai rivers. Subsequently, the flooding was concentrated in the basin of the Huai river and along the Yangtze. Millions of acres of crops were destroyed, inducing widespread famine.[1]

The provinces of Anhui and Jiangsu were most severely affected by these floods due to their geographical proximity to the flooding rivers. The Yangzi River passes through both provinces, and the Huai bisects Anhui, while its continuation, the Hongze lake, is situated in Jiangsu. Moreover, the Grand Canal, which also overflowed, crosses Jiangsu. These provinces were devastated when these waterways flooded to the extent that they joined each other overland.[2]Reports from Wuhu, Anhui, estimated 100,000 drowned and detailed water as deep as six feet in the town.[3]

Northern Anhui and northern Jiangsu experienced particular destruction. Situated between the Huai river and its continuation, the Hongze lake, and the Yellow River, this area was particularly vulnerable to the flooding of the Huai.[4]Subsequently, it was nearly wholly submerged by swamp or water, and yielded very little crops.[5]One estimate calculated three quarters of those left destitute by the flooding as residing in the northern sections of Anhui and Jiangsu.[6]

Numerous other areas were also flooded along the Yangzi, which saw its dikes break from Ichang to the sea.[7]Large portions of Hubei were submerged. The Yuen River, a Yangzi tributary, flooded northern Hunan.[8]Other provinces where flooding occurred but was less widespread were areas of Shandong, Zhejiang and Jiangxi. Overall, an estimated 30,000 square miles of land was submerged.[9]

The immediate cause of the flooding was torrential rain, which caused water levels to rise. The water level of the Yangzi was recorded as the highest in 40 years.[10]This led to river dikes and banks being breached. The first recorded instance of this was on May 16, 1911, where the dikes of the Yangzi near Wuhu collapsed.[11]Torrential rain over the following months, particularly June and July, meant other dikes were breached and flooding persisted, until late August and early September.[12]One account of the rainfall from Changsha, Hunan, documents eight inches of rain in three days at the end of June.[13]Strong winds assisted in the breaching of dikes. 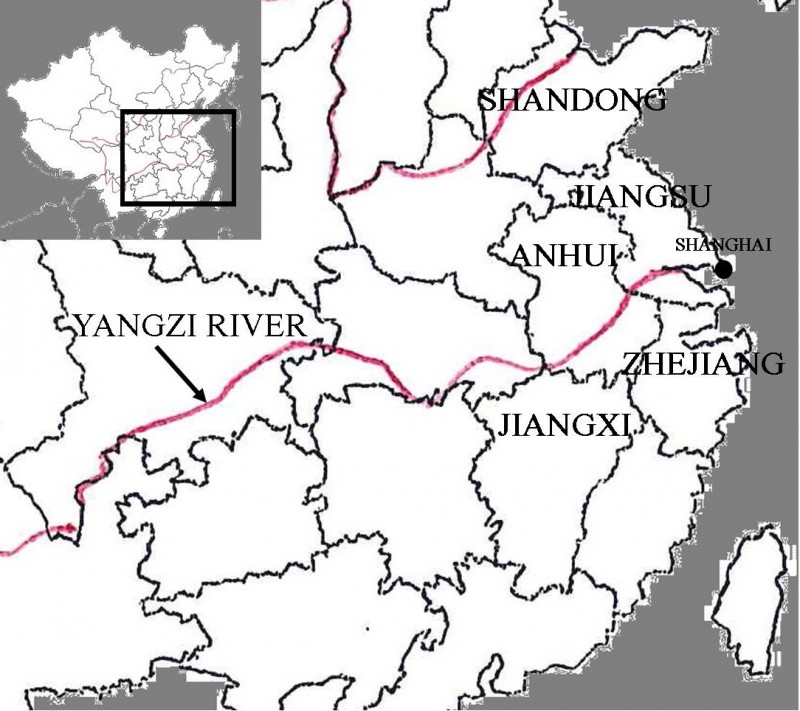 The flooding was enabled by the topography of the region. Generally speaking, the flood and famine region of 1911 is part of a flat alluvial plane, many parts of which are very low lying.[14] In particular, Jiangsu province is rarely 50m above sea level.[15]The poor drainage of the region meant it was ill equipped to disperse the additional water brought by high levels of precipitation. This is exemplified by the Huai river. This river lacked well-defined outlet for water carried from a catchment of 70,000 square miles to reach the sea, relying upon a series of small channels in the swamp at Tsingkiangpu.[16]This meant it, and the Hongze lake into which it fed, was liable to flood. Following frequent flooding in preceding years, reportedly little had been done to address the underlying issues such as depending channels or importantly, improving drainage systems.[17]

The resultant famine was worsened by the events in the years preceding 1911. Floods and famine in 1906-7 and 1910 meant that there existed no crop reserves with which the famine could be alleviated.[18]Northern Jiangsu had reportedly experienced only one ’good year’ of harvest since 1906.[19]

Famine across the flooded areas followed, continuing many months into 1912. In Anhui, it was believed that 70% of the rice crop was destroyed by flooding.[20]Jiangsu’s harvest was thought to be similarly affected.[21]Hubei was considerably better off, and approximately six tenths of the spring crop was gathered. But significantly, throughout these areas unrelenting floodwaters prevented crops being planted for the coming months.[22]The famine was estimated to have severely affected residents of between 30,000 and 40,000 square miles of land.[23]At the beginning of 1912, estimates of those who would require relief to survive were between two and half and three million.[24]One million of these were in northern Jiangsu, and approximately another million in the rest of Jiangsu and Anhui.[25]The death toll was in the hundreds of thousands.[26]

In response to limited supply, food prices rose dramatically. This contributed in no small part to the famine. Even by late October 1911, before much of the famine had taken hold, grain prices were eighty to one hundred percent above normal price.[27]This was exacerbated by the stockpiling of grain by speculators.[28]

Looting and robbery were a widespread response to the desperation of the famine.[2]Riots occurred in a number of locations, including Shanghai, in response to food shortages and prices.[30]The Qing imperial government’s preoccupation with revolution from November onwards limited their ability to provide relief. Many instances of looting and robbery occurred as a result of unrest wrought by the Xinhai Revolution, which would topple the Qing dynasty in early 1912, and the ensuing civil war. These contributed to existing poverty and worsened the famine. Many robbers were emboldened by the state’s occupation in dealing with rebels.[31]Soldiers mutinied at Tsingkiangpu, Jiangsu, and looted the city.[32]Linhuaikuan, Anhui, was ransacked in similar circumstances.[33]Hankou was destroyed through burning, bombardment and looting.[34]Reports of robbers and brigands in the afflicted areas were common.[35]Undoubtedly, the discontentment produced by the famine fuelled the revolution. One element of this was the crowding of cities such as Anqing with famine refugees.[36]Many smaller settlements were looted, activity that was commonplace in these areas during the revolution. Such looting impacted the wealthy’s ability to aid those suffering from the famine. Similarly, local business was disrupted, and the unrest had a negative effect on trade within China.

All of this severely limited the availability of relief from the state in particular.[37]Local officials were provided with money for relief but in many cases this did not amount to more than the most short-term and superficial of relief. Typically small amounts of money, not food, were provided, and often only enough to provide very short term security. The provision of relief in monetary terms reportedly worsened inflation.[38]In some cases local elites attempted to provide food, but they were largely unable to acquire enough to properly combat the famine.[39]

Much of the effective relief to the famine was instead organised through other means. The Central China Famine Relief Committee, comprised of both Chinese and foreigners, was particularly active. In addition to saving lives, the Committee aimed to address the causes of flooding by conditioning the provision of food on work by those deemed able. These works included the digging of ditches and deepening of canals and the construction of roads and dikes. The reach of the Committee was limited, it estimates that 10% of the suffering were being relieved by April 1912.[40]But by June, 147,300 men were being put to work and 639,800 fed.[41]Its work, predominantly organised on the ground by missionaries, ended in July, and the Committee was estimated to have received and distributed $1,000,000 (Mexican silver dollars).[42]

Other notable responses include the American Red Cross’s procurement of an engineer, Charles Jameson, to survey the flood and famine region. He provided detailed recommendations of what work need be done to prevent futures disaster, much of which was utilised at later dates.[42]

Beau Edwards (History with Politics) is an undergraduate in the class of 2019 at the University of Manchester.

[4]Charles Jameson, ‘River, Lake Land Conservancy in Portions of the Provinces of Anhui and Jiangsu, North of the Yangtsze River’, The Far-Eastern Review 9/6 (1912), 247.

[5] ‘River Systems of the Provinces of Anhui and Jiangsu North of the Yangtzekiang’, The Chinese Recorder (Shanghai), 01 February 1912, 69.