The Gansu Earthquake of 1927 began at approximately 4am on the 23rd of May in Gulang County, which sits astride the Silk Road in China’s Northwest.[1] The initial tremors reached a magnitude of 7.6, and successive aftershocks continued for up to three weeks.[2] The nearby cities of Liangzhou, Ningxia, and Lanzhou were directly affected, and it is estimated that more than 40,000 people died.[3] [3] Commonly referred to as the time “when the mountains walked” by the local community, the earthquake left devastating economic, social and environmental effects in a region where natural disasters were already frequent.[4] Nonetheless, the event was eclipsed by the considerable political struggles of the Chinese Republic and the intensifying civil war between the Nationalists, Communists and independent “warlords”.

The epicentre of the quake occurred in the district of Gulang, now the central-urban district of Wuwei city, and a prefectural-level city in today’s People’s Republic of China.[5] Situated alongside the Hexi corridor, Liangzhou is surrounded by the Gobi desert towards the North but more significantly it is surrounded by mountains towards the south. Alongside the mountains, Liangzhou consisted of military defences due to its battleground past which proved to be detrimental during the earthquake as together the mountains and fortifications engulfed many villages.[6] 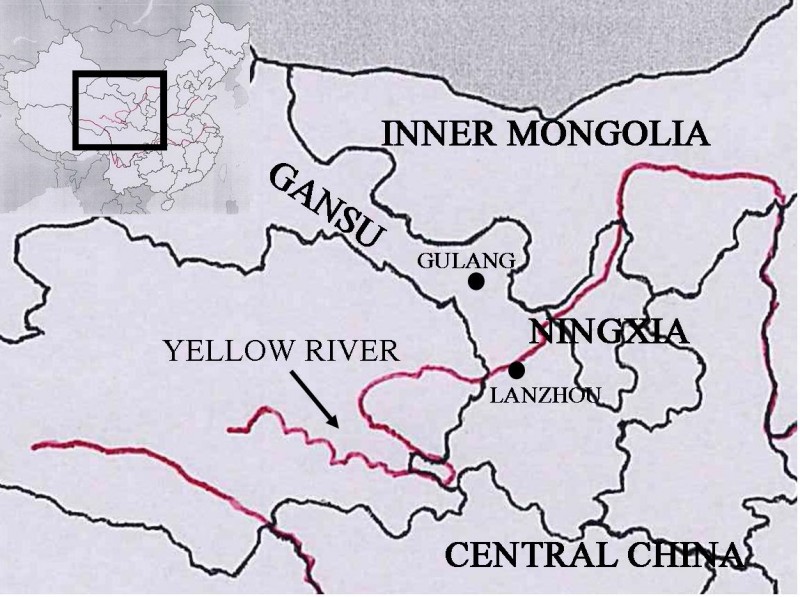 The event consisted of two quakes. The first at 4am was a minor tremor that caused no damage but alerted the population of those in and around the Liangzhou district, but the second and most severe quake shook the province at 5:17am.[7] The second quake instantly affected the triangular area between Liangzhou, Lanzhou and Ningxia.[8] The U.S. Geological Survey has estimated the most severe quake presented a magnitude of 7.6 on the Richter scale.[9] Minor quakes continued three weeks after May 23rd which renewed the fear of survivors and stopped many from returning to areas left standing in their villages.[10] Lanzhou and Ningxia were reported to have remained strong and withstood the effects of the severest earthquake and the following trembles weeks later experiencing minimal damage to these areas. [11]However, Liangzhou and villages closely surrounding the area were completely demolished by the severe extent of the earthquake.

The earthquake is estimated to have killed several tens of thousands of people instantly based on several reports a few months afterwards. Liangzhou alone experienced a loss of 50,000 inhabitants (70% of Liangzhou’s population) whilst Gulang experienced a loss of 90% of its inhabitants.[12] The majority of those affected were reported to have been women and children who remained indoors after the first minor tremble.[13] Many missionaries were also caught in the disaster. It was reported 34 American and European missionaries were caught in Liangzhou during the earthquake of which only one remained unaccounted for.[14] The magistrate of Liangzhou perished along with his family.[15]

Further to the loss of inhabitants during the Earthquake, catastrophe lay in the complete destruction of many villages and districts. Liangzhou experienced the destruction of seven-tenths of the district, much of which was experienced in the upper city. Much of the lower city in Liangzhou remained somewhat intact. Kulang was described to have disappeared. Sixiang, the largest centre that was home to the ‘work of the city of the divine world’, was destroyed and Honanpu was left a heap of stone and clay.[16] There is no approximation of the cost of the damage caused by the earthquake but it is clear it stopped civilization in and around the area of Liangzhou. The severity included the death of many and the loss of agriculture leaving these communities to starve.

Following the destruction caused by the catastrophic quake, minor trembles continued for over three weeks.[17] Afraid to return to half-demolished houses that were consistently rocked by tremors, residents constructed temporary huts, barracks, and mats.[18] Minor landslides that blackened the water supply and the death of the majority of livestock resulted in dehydration and hunger.[19] Many were subject to starvation which led to an increased rate of suicides and in some cases cannibalism.[20] There are no estimates for the proportion of deaths caused by the earthquake and caused by starvation but it is certain total fatalities exceeded 100,000 deaths. [21]

One of the first words of the devastation to reach China’s coastal cities came from a German Vicar Apostolic stationed in Sixiang working for the society of the Divine Word Mission. Missionaries in the area that survived attempted to provide relief to those within reach and hospitals that withstood the shock offered relief to all those who were suffering.[22] It is estimated that between 3,000 and 4,000 people were fed by a major relief committee in the months after the earthquake.[23] Medical supplies, food, clothes, and money were the four most popular items requested by residents, and houses of worship acted as relief centers, caring for the wounded.[24]

The Beijing government issued $10,000 whilst two local governors, offered large sums for relief though sources do not specify their amount. [25] Though there was this surge of relief for the victims of the quake, the amount provided did not reflect the destruction caused. People’s homes were demolished and the majority of agriculture was destroyed consequently, the main source of income in Chinese rural economies such as Gansu. Due to the destruction of communications and infrastructure in and around Liangzhou, relief from around China was delayed especially in the case of Shanghai. Whilst Shanghai attempted to remedy the communications problem in Liangzhou, the Chinese Red Cross stationed in Shanghai stated it would take a minimum of two months to reach the affected areas.[26]

Further to the quake’s destruction, a draught struck the Kansu province in 1928 which only intensified the level of starvation that was rife within the province.[27] The effect of the quake on Gansu exemplifies the vulnerability of the province to natural disasters and the challenges faced in dealing with such events.